Since I started Boca, I have been mulling about influencers – getting influencers to talk about a product seems like a good way for a brand to be discovered.

The possibility of micro-celebrity

What I like about the existence of influencers is the democratization of celebrityhood.

It is Chris Anderson’s Long Tail all over again. Here is a graph from the book that illustrates that: 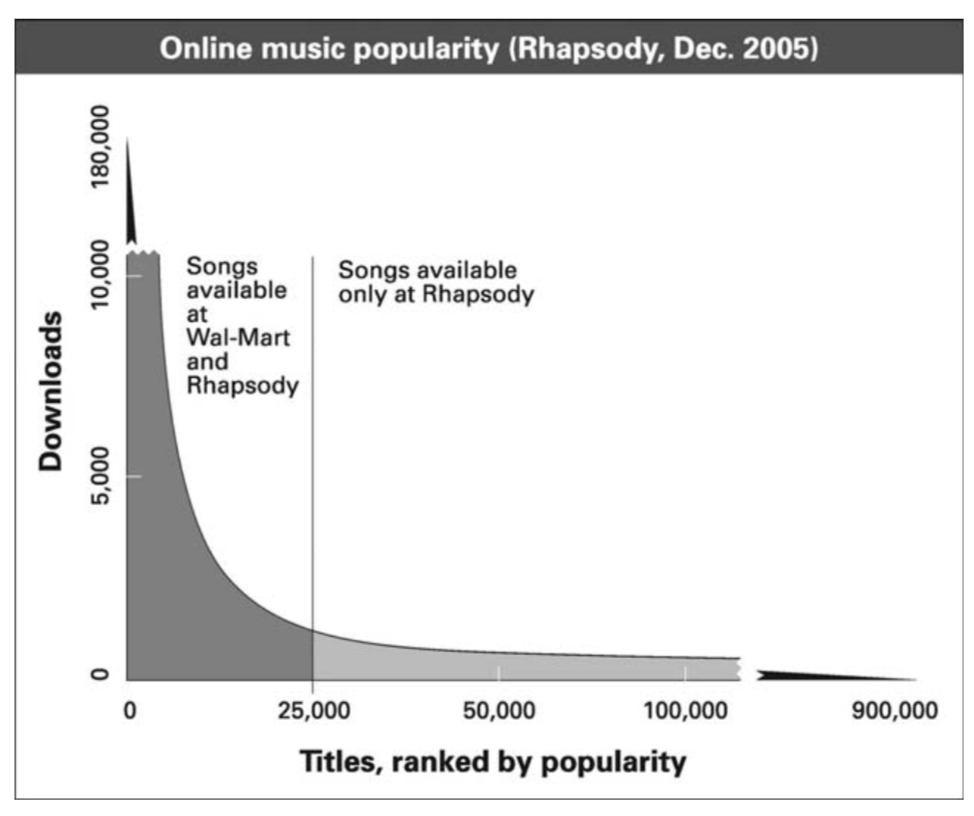 If you ranked music tracks by popularity you get a curve that looks like the above. Walmart, a physical retailer, has to cut off their inventory at some point (usually around the “head”). Rhapsody, an online music store (that was popular when Anderson wrote the book) can offer a much larger catalog (the “long tail”).

The same is true for influencers. If you were a brand owner in the past and wanted to hire an influencer, it made sense to seek out the most famous. But now, with platforms like Instagram, the long tail of celebrity is accessible.

Waiting for an influencer aggregator

That being said, the whole process of finding an influencer, sending them a DM, negotiating terms, sending product, waiting for content to be published, and praying for results seems daunting.

(Maybe its only daunting because I am new to this).

I am waiting for a true influencer aggregator ‘product’ to emerge. There a service providers – the ones who have an influencer database and their team negotiates with the influencer on your behalf.

But won’t it be awesome to have a real aggregator product or platform? A leaderboard where I can browse influencers by category. A rate card with Kickstarter-style slabs. A content creation/submission interface. Perhaps even a smart assistant to negotiate custom pricing. I’m waiting.

A friend of mine opened a restaurant recently. We were talking about influencer marketing, and I said without thinking “You know what, we should be influencers”.

But the idea of constantly posting content in the pursuit of a status game feels so narcissistic.

This morning I found the full quote by Stewart Brand which is usually just shortened to “information wants to be free”.

That can one strategy to be be an influencer: by giving valuable information for free. By doing that, the value of the information gets accrued to you, in the form of influence.

Information wants to be free and expensive

Status as a service. A long article, which among other observations (not all of which I agree with) says social networks confer status to those who show “proof of work”.